A painting re-attributed to Aelbert Cuyp: connoisseurship and technical research 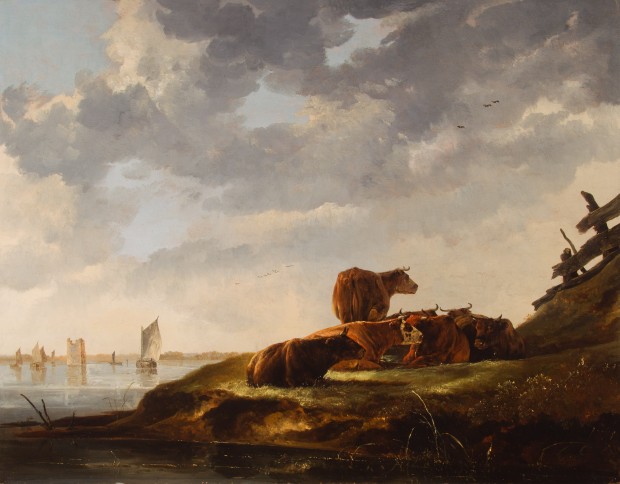 River landscape with seven cows and the ruins of Merwede Castle

THERE ARE FEW seventeenth-century Dutch painters for whose works questions of attribution are as problematic as they are in the case of Aelbert Cuyp. Until recently few dared to pronounce clear- ly and confidently on the matter.1 But today we have a number of useful scientific methods at our disposal. This article focuses on a single painting that has hitherto been labelled ‘dubious’ for reasons

that are not entirely clear, and reaches a conclusion that is based on connoisseurship and technical examination. We also call for the study of Cuyp’s œuvre to be based on a clearly defined account of the methods used, which should widen the scope of the debate.

River landscape with seven cows and the ruins of Merwede Castle comes from the illustrious Czernin collection, where it was first documented in 1804 (Fig.19).2 Count Czernin also owned an important early work by Cuyp, Cattle and herdsmen, with the Mariakerk, Utrecht, now in the Residenzgalerie, Salzburg, where the former work has also been on loan in the past.3 After the Second World War, River landscape with the ruins of Merwede was sold and entered the splendid collection built up by the British Railway Pension Fund, which put it on loan to the J. Paul Getty Museum, Los Angeles. By the time the Fund decided to sell the collection, the doubts that had existed for some time caused the painting to be presented at auction in 1998 as ‘attributed to Aelbert Cuyp’. It was acquired by an American collector, but in 2010 it was auctioned again, when it was purchased by the current owner.4