One of Abraham Bloemaert’s most charming genre pieces is undoubtedly this image of a laughing boy, identified as a carnival reveller by his rumbling pot and bizarre headgear. He is dressed in a white garment and wears a hat tied with a scarf. In it are stuck playing cards, a wooden spoon and a bird’s wing. A string of sausages is slung over his shoulder, and from his back dangle a foxtail with a jester’s bell and the inevitable tankard. He carries a so-called ‘rumbling pot’, an earthenware jar covered with a pig’s bladder into which a wet reed was inserted. Movement of the reed produced an unpleasant sawing sound. This was mainly heard on Shrove Tuesday, when young men dressed as fools would go from door to door singing in exchange for money or delicacies.1 Cornelis Bloemaert, the artist’s son, made a print after the painting that firmly places the boy among such contemporaries (fig. 1). It includes the following verse:

(‘See here comes the Shrove Tuesday sot / coming with his rumbling pot. / Here him singing, my dear man / and give him a biscuit from the pan’)

The caption further states that Abraham Bloemaert was the picture’s creator. Bloemaert spent the largest part of his long and productive life in Utrecht; he was one of the city’s most important painters and had many pupils. His style changed considerably over the years. In his early career, beginning around 1590, he worked in a late Mannerist idiom, executing mainly highly complex history paintings. After the turn of the century his compositions became more tranquil and in the 1620s he came under the influence of the Utrecht followers of the Italian painter Caravaggio, such as his student Hendrick ter Brugghen, who spent a number of years in Italy (see cat. no. 6). The Boy with rumbling pot exhibits a number of characteristics typical of the new style: first and foremost, there is its ‘popular’ subject matter; then the composition, which places the half-figure close to the spectator, and the strong lighting; and, finally, the sober palette, consisting of shades of brown, white, black and red. Particularly striking are the two diagonal shadows on the rear wall, which further increase the picture’s dynamic. One of the first works marking Bloemaert’s change of direction is the Flute player of 1621 (Centraal Museum, Utrecht). In comparison, the Boy with rumbling pot is more smoothly painted and lighter in tone; this seems to indicate it was executed somewhat later, probably between 1625 and 1630.3

In Haarlem, carnival merrymakers were a popular motif even before 1625. Around 1615 Frans Hals painted a large canvas featuring Shrove Tuesday revellers, now in The Metropolitan Museum of Art in New York, and a few years later one of a somewhat older rumbling-pot player surrounded by laughing and teasing children (fig. 2).4 It is well-known that the Utrecht caravaggisti inspired Haarlem painters such as Frans Hals, who adopted Utrecht subjects of everyday life, simplifying them to realistic-seeming images.5 Bloemaert’s Boy with rumbling pot leads one to suspect, however, that the influence was, in fact, mutual.

A cottage with peasants milking goats

This painting, which has never been lined - highly unusual for a seventeenth-century canvas - only became known to the art historical community in 1995, when it appeared at auction. 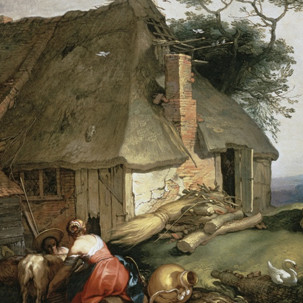