This is one of a unique group of idyllic landscapes Abraham Bloemaert began painting around 1620. The scene is dominated by a somewhat dilapidated farmhouse with, in the foreground, two women milking goats. The milk is collected in a wooden tub, later to be transferred to the large carrying jug lying ready nearby. Bloemaert incorporated other charming details of peasant life into the painting. The goat at the left, for example, nibbles on a twig, while a sheep sticks its head out of an opening in the farmhouse annex. Other barnyard residents include a swan next to a wicker fish basket, two boys playing among the large tree trunks and, at the right, a pig. The hole in the peaked roof serves as a dovecote, with sticks on which the birds could rest. From the chimney hang small earthenware jars with a narrow neck, designed for nesting starlings. These were often eaten. Finally, behind an open door next to a pile of straw and firewood, one can just make out the farmer’s wife.

Although the farm itself looks Dutch, the same cannot be said for the broad hilly landscape in the background, the exotic clothing of the milkmaids, or their large straw sunhats. And, indeed, the landscape does appear to depict a more easterly part of the world. This is apparent from a Bloemaert drawing with virtually the same scene, which, being overlaid with a pattern of squares to facilitate the image’s transfer to canvas, must have been used as a model for the painting (fig. 1).1 There is, however, one important difference: the sketch includes an extra portion at the right showing a tumbledown shed and the Prodigal Son praying among the pigs (Luke 15:11-32). This leads one to suspect that the painting, too, was once larger than it is today, and this is confirmed by the fact that the canvas is painted all the way to the edge on the right-hand side. Moreover, the vertical central slat of the original stretcher has left a vague imprint on the painting about 8.5 centimetres to the right of what is now the middle of the canvas. This indicates that a strip of about 17 centimetres may well have been cut off at the right.2

It seems likely, then, that the subject of the painting was also the Prodigal Son, and that the boy leaning on the trunk at the right and apparently gazing beyond the picture frame must have originally been watching the destitute swineherd.

As early as 1604, artists’ biographer Karel van Mander remarked that Bloemaert often made drawings after nature in the environs of Utrecht, among others of ‘drollighe Boeren huysen’ (‘droll farm­houses’).3

These studies later found their way into his prints and paintings. The building in this picture, too, could easily have been based on personal observation. However, Bloemaert never depicted the real Dutch landscape, a genre becoming popular in Haarlem and Amsterdam at around this time. Although the artist borrowed details from reality, his compositions are entirely imaginary and always include a mythological or biblical scene, no matter how small.

This painting, which has never been lined – highly unusual for a seventeenth-century canvas – only became known to the art historical community in 1995, when it appeared at auction. Accordingly, it is not included in Roethlisberger’s catalogue raisonné, which had been published two years earlier.4 In the meantime, however, Roethlisberger has dated it to around 1620.5 It thus marks the transition from the fantasy landscapes of the sixteenth century to the more naturalistic works of the seventeenth-century masters.

One of Abraham Bloemaert's most charming genre pieces is undoubtedly this image of a laughing boy, identified as a carnival reveller by his rumbling pot and bizarre headgear. 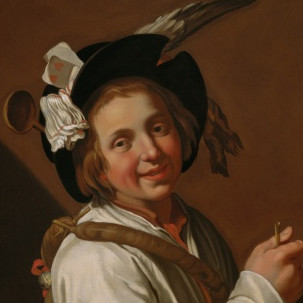