Aelbert Cuyp is the best-known member of a family of painters from Dordrecht.1 He was probably trained by his father, Jacob Gerritsz Cuyp (1594-1651/52), with whom he would often work in the 1640s. Although Aelbert worked in diverse genres, including portraiture, figurative pieces, cattle pieces, and stable interiors, he was first and foremost a landscape painter. This painting from 1639, Landscape with a timber yard in Dordrecht, is among his earliest dated works.2 After 1645, the painter evidently found it unnecessary to date his landscapes, and his later work can therefore be dated only approximately. The whereabouts of this painting were unknown for many decades. In December 2008 it turned up at an auction in England and was purchased by the Fondation Aetas Aurea, after which it underwent thorough restoration.3 A truly delightful picture emerged from beneath the yellowed layer of varnish. Cuyp produced several other paintings in 1639, which are strikingly diverse in terms of style and subject-matter.4

While other early paintings display mountain motifs that may derive from Esaias van de Velde (1587-1630) and Hercules Seghers (1589/90-1633/38), this work displays a flat, Dutch landscape, painted in a largely tonal style. Cuyp produced paintings of this kind under the influence of Jan van Goyen (1596-1656). The warm, southern sunlight that would characterise the best-known and most original part of Cuyp’s work, which he produced from around 1650 onwards, is not yet in evidence here. Still, the painter’s interest in rendering light is already clear. Especially near the walking figure in a striking red coat on the right, who has just crossed the little bridge where a dog is relieving himself, we see a sharply-defined patch of sunlight on the ground. The highly impressive cloudy skies, a characteristic feature of Cuyp’s later work, are also indicative of the powerful ambition of the painter, who was still young in 1639. Near the little boat with its figures, changes made by the artist are discernible: to the right of the boat, Cuyp initially painted a mooring post, which was reflected in the water. Later on, he painted this post out; only now has it become visible again now, with the ageing of the paint layers.

With its simple composition and inconspicuous staffage – aside from a few animals, we see figures in the boat and near the bridge – this work is rather in a category of its own in the artist’s oeuvre. In a timber yard, tree trunks have been collected in the open water; rafts are visible in the foreground. Contemporary maps show that there was indeed a timber yard in the Merwede, to the south of the Grote Kerk and between the gates Blauwpoort and Vuilpoort.5 The painter would undoubtedly have seen this timber yard with his own eyes, although the subject of his painting also occurs in a work by Adam Willaerts, dating from 1629 (Dordrechts Museum, Dordrecht).6 Dordrecht’s timber trade dated from the Middle Ages, and for a long time the city had a monopoly on this lucrative activity. This painting recalls the great economic power of Dordrecht, which was long famous for its timber trade and the closely related shipbuilding industry. In the latter half of the seventeenth century, however, it lost this dominant role to other cities.7

The image is bounded on the right by a tall tree, which is cut off at the top by the edge of the picture. Beneath the superbly-executed clouds rises the characteristic skyline of Dordrecht, where Cuyp lived and worked his whole life. Cuyp did not die until 1691, but it is not known whether he painted much in the last thirty years of his life. In 1658 he married Cornelia Boschman (1617-1689), the wealthy widow of a patrician. After that he served in public office in a variety of positions, and it is generally assumed that he gradually gave up painting from then on.

River landscape with seven cows and the ruins of Merwede Castle 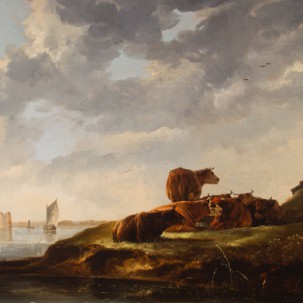