Old woman examining a coin by a lantern is a superb example of the work of Gerrit van Honthorst. Together with Hendrick ter Brugghen (cat. no. 11) and Dirck van Baburen (c.1595-1624), Van Honthorst is one of the most important and best-known of the Caravaggists who worked in the Northern Netherlands. While in Rome, the three artists had been captivated by the work of Caravaggio (1571-1610), who had introduced a radical realism into the art of painting, as well as strong chiaroscuro effects and cropped figures filling the picture plane. After his return to Utrecht in 1620, Van Honthorst started producing genre pieces such as the painting discussed here, each one depicting a single figure seen as a bust, almost without exception illuminated by an artificial light source.1 Nocturnal scenes of this kind earned Van Honthorst the apt nickname of ‘Gherardo delle notti’ (‘Gerard of the night scenes’). Here, he shows us an old woman against a plain background. In one hand she has a coin she is studying intently, while in the other she holds a bulging purse. There is a second purse, brimming with coins, before her breast, brightly illuminated by the light from the candle. The light also falls on part of her face, giving us a clear view of her eyes. With just a few strokes of blue paint the painter contrived to bring the pupils to life. Van Honthorst has made the coin in the woman’s hand visible by allowing its outer edge to catch the light.

Old woman examining a coin by a lantern has recently undergone restoration, and its details and colours can now once again be properly appreciated. We see how suggestively the lantern hanging from a hook and the light spread by the candle were rendered, with just a small number of boldly placed strokes. Despite the rapid, loose brushwork he used for the wrinkled face and flabby neck, here too Van Honthorst has superbly exploited the play of light. The painter has created a kind of halo effect around the headscarf, by leaving the light-brown ground visible in places. In the upper left corner we discern the remains of the authentic signature that someone tried to rub out at some point, presumably in order to sell the painting under another name – that of Caravaggio himself? The date ‘162’ is still clearly legible, except for the last figure of the year, which has been read variously in the past. Recent analysis suggests that the figure is most probably a ‘3’.2 This would make the scene one of Van Honthorst’s earliest genre pieces, produced in the early 1620s, shortly after his return from Italy.

Characteristically, Van Honthorst has used the light-dark contrasts that are so central to Caravaggism to suggest depth. Thus, the outstretched arm with the coin – which, aside from the fingers, is completely shrouded in darkness – enhances the scene’s three-dimensionality by being sharply silhouetted against the brightly illuminated purse. Other features typical of this artist are the close cropping of the figure – the left shoulder and elbow are only partly visible – and his choice of a simple model.3 Van Honthorst would later be followed in his depiction of an old woman as the primary figure by his own teacher, the well-known Utrecht painter Abraham Bloemaert (cat. nos. 6 and 7). The latter’s son, Cornelis Bloemaert, made prints of several of his father’s scenes with half-figures. These prints were widely disseminated, as were those he produced after similar paintings by Van Honthorst.

Thanks to one of the prints by this same Cornelis Bloemaert, we know that Van Honthorst painted another, similar, scene of a woman with a purse. In this painting – which has been lost, and is known only from the print and a few painted copies – the figure is not studying a coin, and has an empty purse.4 The lit candle in the hands of the woman, who gazes directly at the viewer in this scene, has assumed the role of the lantern depicted here. The caption of the print provides a key to understanding the scene, which proves to be a variant on a popular subject: Avarice or Greed, one of the seven deadly sins.5 The apparently mundane scene in the painting described here can also be construed as a rendering of this theme. The pince-nez, the purse and the coin held between the fingers are all traditional attributes of Avarice. In the seventeenth century, avarice was thought to increase in old age as the other passions were gradually extinguished – an idea deriving from classical antiquity.6 Since the scales and books of accounts often included in depictions of greed are missing here, this scene, in which the woman is scrutinising the coin intensely, has sometimes been interpreted as a visualisation of Sight, one of the five senses. A contemporary of Van Honthorst, Crispijn van de Passe, produced a print in which sight is represented by an old woman studying a coin by candlelight, wearing a little pair of glasses, just as in this painting.7

It is highly probable that Rembrandt drew inspiration from Van Honthorst in his youth.8 His Old man counting his money (Avarice) from 1627 (fig. 1) depicts an old man studying a coin by candlelight. Rembrandt must have derived the subject from Van Honthorst, but chose instead to depict a man to convey the theme of greed. Rembrandt also adopted almost literally a detail from Van Honthorst’s other painting, the composition of which became well-known from the Bloemaert print. For in that work the old woman has her hand before the candlelight, as the old man in Rembrandt’s painting. That the latter’s knowledge of the work was not confined to the print can be inferred from another detail of his painting. Just as in the scene discussed here, the man painted by Rembrandt is holding a coin between his fingers, a motif absent from the print. Other artists too appear to have been inspired by Old woman examining a coin by a lantern.9 Both Rembrandt and Van Honthorst present their figures in a fairly negative light: they portray counting money as a reprehensible way of spending one’s time. While greed and miserliness are sinful at any stage of life, this applies with particular force to the aged, whose final days are slipping away. 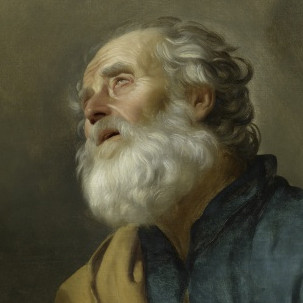