Saint Peter Penitent by Gerrit van Honthorst demonstrates at a glance that the artist had a consummate gift for the convincing representation of emotions such as grief and despair. The impressive image of the ageing apostle, his hands folded in prayer, moves the viewer without descending into theatricality. Van Honthorst is believed to have painted this work during his stay in Italy, where he spent several years after his apprenticeship to the Utrecht painter Abraham Bloemaert (cat. nos. 6 and 7), from around 1613 to 1620. The young Honthorst would have been confronted with Italian influences even before his departure for the south, since they had pervaded the work of his teacher and other Utrecht artists who had already made the journey. Karel van Mander’s Schilder-boeck (1604) is another source that will have familiarised Van Honthorst with subjects such as realism and the representation of emotions before his journey.2 This artists’ handbook contains a chapter (‘Wtbeeldinghe der Affecten, passien, begeerlijckheden, en lijdens der Menschen’) on how to render grief and despair. Van Honthorst’s penitent Peter appears to have been created almost exactly according to Van Mander’s guidelines: his half-open eyes, parted lips and hand-wringing are all cited as appropriate to the depiction of a sorrowful figure.3 However, the true source for religious works such as Saint Peter Penitent must be sought in the devotional images with which Van Honthorst eventually became familiar in Italy. For it was in cities such as Bologna and Rome that he was able to study the masterpieces of the Carraccis and Bassanos, and above all the greatest master of realism, Caravaggio (1571-1610), at close quarters.4

Images of the penitent Mary Magdalene, Jerome and the apostle Peter were popular subjects in Counter-Reformation Italy. The overtly emotional saints, generally shown as half-length figures and with great emphasis on facial expression and hand gestures, were intended to evoke feelings of intense religious empathy in believers, and ultimately to encourage devotion to one of the seven sacraments – confession (repentance).5 Van Honthorst, who had a Catholic upbringing, will not have harboured any objections to sentimental religious and pre-eminently ‘Papist’ art of this kind – although he rarely painted Biblical themes after his return to the Northern Netherlands.6

The large keys, which occupy a prominent place in the image, immediately identify the figure as Peter, keeper of the keys to heaven and hell. The difference in colour between the two keys reflects their functions: the gold key leads to the afterlife, while the silver (or iron) key opens the gates to the underworld (Matt.16:19). Peter, who is also known as the ‘Prince of the Apostles’, was the first of Christ’s twelve disciples. He has been the subject of numerous works of art, the undisputed highlights of which include those painted by Caravaggio. Van Honthorst must have been familiar with these paintings – we know, for instance, that he made a drawn copy of Caravaggio’s Martyrdom of Saint Peter (Santa Maria del Popolo, Rome).7 Van Honthorst made several images of Peter, all of them depicting the saint as an old man with a full, grey beard and balding head, wearing a blue tunic and a yellow cloak (fig. 1).

Peter’s denial of Christ is described in Mark 14:66-72. According to the Biblical text, Christ was arrested by the high priest Caiaphas and questioned by him. Peter waited in the courtyard outside Caiaphas’s house to see what would happen, and a female slave recognised him there as one of Christ’s disciples. But he flatly denied it. At his third denial, he heard the cock crow for the second time. This reminded the shocked Peter of a prediction that Christ had made earlier, but which he had refused to believe: ‘Before the cock crow twice, thou shalt deny me thrice’. Then the apostle realised that he had indeed denied Christ and his God and burst into tears. It is this moment of realisation and repentance in the face of God that Van Honthorst has depicted here.8

The painting is a beautiful example of Van Honthorst’s style of painting during his Italian period. His technique is loose and open –very different from the smoother, stylised approach he would develop after his return to Utrecht. The realism of the aged Peter’s expression and his pose also depart from the idealisation that is characteristic of Van Honthorst’s later work. Because of this – together with the splendid state in which the painting is preserved − Saint Peter Penitent gives a good picture of the quality that Van Honthorst attained during his stay in Italy. This did not go unnoticed: the Utrecht painter attracted art lovers such as the Marquis Vincenzo Giustiniani, Cardinal Scipione Borghese, and Grand Duke Cosimo II as clients and patrons. The reputation that Van Honthorst had built up in the south travelled back with him when he returned to Utrecht in 1620: he was received with great enthusiasm in his home country, where a glorious career awaited him.9

Old woman examining a coin by a lantern (Sight or Avarice) 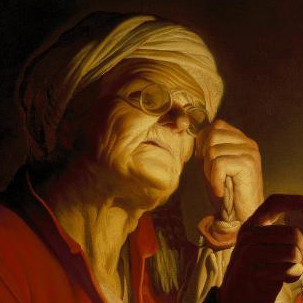