The collection of the Mauritshuis is expanding, but not only with paintings. Spectacular works of decorative art are also added to the museum’s interior, such as most recently a regal candle chandelier. 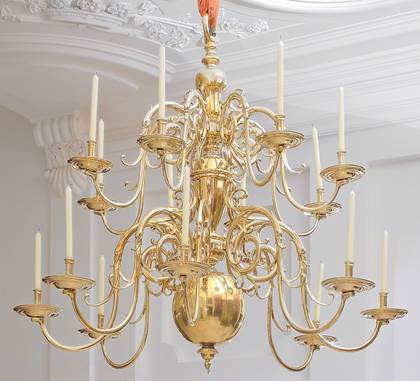 The art collectors George and Ilone Kremer took the occasion of Frits Duparc’s departure as director of the Mauritshuis to present the museum with an exceptional gift, an authentic seventeenth-century cast brass chandelier from their own collection. It is one of the most elaborate lighting fixtures of its kind made in the Golden Age.

The chandelier is made of a column with two tiers of eight arms. Each arm is decorated with so-called auricular ornaments, pikes’ heads and leafs. Perched at the end of the arms are bobèches with candle cups. The chandelier was transported to the Mauritshuis in parts and reassembled, like a do-it-yourself kit, on the spot. It now hangs majestically in the museum’s hall.