Ever since it resurfaced in the early nineteenth century, this painting has been attributed to a wide variety of artists, from Rembrandt to Brouwer, from Arthois and Teniers to Jan Lievens. Given the size and distinctive conception of the landscape, nineteenth century authors saw it as the work of Rembrandt. Following the rediscovery and re-evaluation of the paintings of Adriaen Brouwer (cat. no. 10), the makers of the Flemish and Belgian art exhibition held at the Royal Academy in 1927 believed they could firmly link it to him.

Made available to art lovers and connoisseurs for the first time in more than 100 years, the landscape caused something of a sensation at the 1927 show. In their reviews, many art historians specialised in Flemish and Dutch painting remarked on this unusually large and interestingly conceived picture, casting doubt on the attribution to Brouwer and making various alternative suggestions. The attribution remained uncertain and continually questioned until 1932, when Hans Schneider presented a convincing argument in favour of Jan Lievens. Not everyone was persuaded, however and the debate continued.

Artistically, Hilly landscape with resting peasants is very close to a work often exhibited in London in the nineteenth century and thus quite well known, and which since 1927 has been considered its pendant, An evening landscape with fishermen (fig. 1) from the collection of the Duke of Westminster. In fact, the two pictures were already considered a pair in the seventeenth century, at least at the time when the originally rather narrow rectangular horizontal panels were enlarged to conform to the new taste for more balanced, broader formats.

Not only the dimensions but also the theme and style unite these two pictures. With their small bodies of water, sandy roads with looming groups of trees and villages in the distance they seek to capture the mood and atmospheric effects of a certain time of day: on the one hand the coolness of a late afternoon, on the other the warmth of a glorious sunset. Characteristic for the composition is the foreground zone, which is flat and closed off, or in any case does not lead into depth. The extremely rough, sometimes impasto and granular application of paint and the disintegrating contours give the works an almost impressionist feel and contribute to their expressivity. Strong colours and contrasts of light and dark dominate in both, creating areas of deep and shadowy impenetrability. These lively contrasts and the dramatic colouration, like the powerful arrangement of the groups of trees, which in Lievens’s original conception pushed their way to the very edge of the picture, are fundamental to the paintings’ impact.

In 1635 Lievens arrived from England in Antwerp, where he stayed until moving to Amsterdam in 1644, and there can be no doubt but that these light-filled, colourful pictures were created under the influence of the late landscapes of Peter Paul Rubens (1577-1640), executed following his purchase of the country estate ‘Het Steen’ in the second half of the 1630s. Lievens was also friends with Adriaen Brouwer in this period, but the latter’s small-scale, tonal landscapes were of no consequence for our piece, although Brouwer’s influence can be felt in other works by Lievens.

Unlike the Hilly landscape with resting peasants, which has been transferred to canvas, the Westminster painting still has its original support, consisting of three wooden panels, with a fourth having been added at the top at a later date. The second panel from below bears the mark of the Antwerp panel-makers’ guild, thus indicating the work may have been painted during Lievens’s sojourn there. Among the artist’s other works similar to the landscape pendants in style, technique and interpretation and also painted on wooden panels with an Antwerp mark the most important is undoubtedly the Landscape with Tobias and the angel (fig. 2), now in the National Gallery in London.

Should the marks on the panels already speak in favour of the Lievens landscapes having been executed in Antwerp, this is further supported by the staffage figures, which were added by David Teniers the Younger during his stay in the city. The somewhat clumsy walking peasant and the two resting ones in the Hilly landscape are typical of Teniers’s figural style in the period around 1640. The more generously and loosely painted group of fishermen in An evening landscape was likely done a few years after, probably around the middle of the decade. Interestingly, a copy after the latter has survived that does not include the Teniers figures, again indicating that they were added later.

One of the most important history paintings with landscape background executed by Lievens in Antwerp is the Sacrifice of Abraham in the museum in Braunschweig. In this work the landscape does not play the leading role, but it does contribute significantly to the picture’s expressivity, achieved using the same stylistic means as in the landscapes discussed above. Through loose, impasto brushwork Lievens creates a glowing colouration, sometimes with many overlaid layers of paint, which in its intensity cannot fail to have an emotional impact on the viewer. In this, too, Lievens reveals his great originality of conception in the depiction of the landscape, one that is quite different not only from that of Rembrandt and Brouwer, to whom his works in this genre are so often attributed, but also from Rubens.

Christ at the column 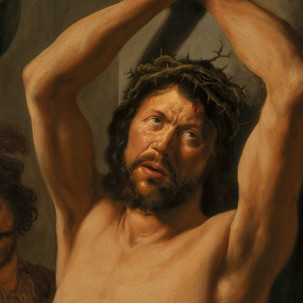