Clothed only in a loincloth and wearing the crown of thorns, Christ stands at the column, his hands chained together above his head. The half-naked body is placed close to the picture plane and starkly illuminated, directly confronting the viewer with the figure’s suffering. Tears stream from his eyes, which gaze heavenwards, and blood spills from the wounds inflicted on his brow. A halberdier watches the scene from the dimly lit background.

This life-size depiction of Christ at the column is one of the earliest works by Jan Lievens, described in 1641 by the Leiden chronicler Jan Orlers as a wunderkind.1 According to Orlers, following a two-year period in the studio of the Amsterdam history painter Pieter Lastman (cat. no. 33), Lievens returned to his native city at the age of 12 or 13 and began working as an independent master in the house of his father.2

Lievens’s earliest pictures – none of which are dated – are broadly executed history paintings, allegories and genre scenes with half-length figures.3 Like the painting described here, these, too, are daring, large-scale compositions. Lievens’s penchant for grandeur was noted already by Constantijn Huygens in his autobiography, written in the years 1629-1631. In his eyewitness account, Huygens compares the merits of the two painter-friends Lievens and Rembrandt. He praises Lievens for his ‘greater […] inventiveness and audacious themes and forms. Everything his young spirit endeavours to capture must be magnificent and lofty. Rather than depicting his subject in its true size, he chooses a larger scale’.4 By contrast, Rembrandt in his Leiden period chose to work on a small scale.

The two painters were close friends in the years 1624/25-1631 – before Rembrandt moved to Amsterdam and Lievens departed for England – and they competed with one another in their striving for stylistic and technical innovation.5 The Lievens picture here under discussion was probably executed around 1625, at a time when his work served as a model for the less experienced Rembrandt6 and there was not yet any sign of influence in the opposite direction. Also from this period are two related history pieces with half-length figures, Esther’s feast (The North Carolina Museum of Art, Raleigh) and Pilate washing his hands (Stedelijk Museum de Lakenhal, Leiden).7

In these early compositions, Lievens was inspired by the revolu­tion­ary work of the Utrecht followers of Caravaggio such as Hendrick ter Brugghen (cat. no. 11) and Gerrit van Honthorst (cat. nos. 27 and 28), who had returned to the Netherlands from Italy around 1620. The startling chiaroscuro and the use of half-length figures is characteristic of the caravaggisti style. Particularly popular among these artists were scenes with a suffering – male – nude at their centre, such as the martyrdom of St Sebastian8 or Christ’s Passion. Caravaggio’s depiction of the Flagellation and his Ecce Homo (fig. 1)9 found an echo in the work of his followers. Gerrit van Honthorst, for example, often depicted the Crowning with thorns (fig. 2) and the Mocking of Christ.10 Lievens’s rendition of Christ at the column appears to have been inspired by this tradition.

While Honthorst generally employed a rather smooth technique, in these years at least Lievens experimented with looser brushwork. In this work, for example, thick dabs of paint are used to suggest the reflection of light on the body – forming a contrast to the thinly painted figure in the shadowy background. The artist used a hard object – probably the handle of his brush – to create the lines in Christ’s beard, scratching into the wet paint to suggest blond or dark hairs, depending on the colour of the underlayer (compare cat. no. 25). Rembrandt, too, employed this method at the time. Lievens had become acquainted with the abundant use of impasto while working with Lastman. In his early ‘rough’ manner,11 Lievens may also have been inspired by such famous Flemish painters as Jacob Jordaens (1593-1678) and Anthony van Dyck (1599-1641),12 who in turn had been influenced by sixteenth-century Venetian art.

Made available to art lovers and connoisseurs for the first time in more than 100 years, this landscape caused something of a sensation at the 1927 show at the Royal Academy in London. 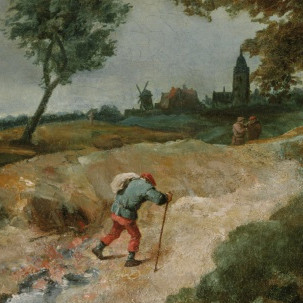