Jan van Bijlert made several paintings of the Madonna and Child after returning from Italy, and this monumental work, which strongly reflects the influence of his time abroad, is undoubtedly among the most successful. The painting is indeed one of the great highlights of the artist’s multi-faceted oeuvre, the quality of which is highly variable.1 The Virgin Mary’s historicising clothing give her an apt air of timelessness. Her dark hair is covered by a grey cloth embellished with gold thread, which is tied around her head, its ends dangling to one side. The red silk dress is trimmed sparingly with gold, and contrasts magnificently with the sky-blue shawl that is draped around her in a broad sweep. Mary holds her Child against her tenderly, while the chubby boy child embraces her and lays his head lovingly against her shoulder. Mary has a distinctly majestic air, which is achieved by her erect posture, and more importantly by the way in which she averts her serene gaze from us and – together with the fair-haired Christ Child – looks out of the pictorial surface. This creates a certain distance from the viewer that lends the image a distinct monumentality. Other elements too, such as the cool illumination, the pale skin tones, and the subdued composition with a minimum of staffage – all attention focuses on the enthroned Mother and Child – reinforce the powerful yet restrained impression made by this painting. Whereas in his genre paintings Van Bijlert often left the background completely empty, for this most dignified of images he opted for a more suitable decor: purple drapes and a pilaster with a complex base, a type deemed appropriate for important buildings, which thus adds to the imposing effect.2

Van Bijlert is generally described as a Utrecht Caravaggist (see cat. no. 4), but as this work clearly demonstrates, he also worked in an unmistakably Classicist style.3 Compared to other images of the Virgin Mary in Van Bijlert’s oeuvre, and to those of the thematically-related Caritas scenes, this masterpiece with its silvery sheen could indeed be described as his most classicist Madonna. This becomes clear when we compare it, for instance, to the somewhat larger Madonna and Child in the collection of the Herzog Anton Ulrich Museum, Braunschweig (fig. 1). In this painting Van Bijlert chose to depict Mary diagonally from behind; she looks over her shoulder, directly meeting the viewer’s eyes, while pointing to the Christ Child. Here too, we see the same knotted draperies and pilaster in the background, but Mary’s bent posture and above all her emphatically pointing finger – a common gesture in Van Bijlert’s oeuvre (see also cat. no. 4) – give this image a more narrative and less majestic character.

It is undoubtedly the painting’s classicist appearance that prompted the misattribution of this unsigned work in the past to an unknown French master.4 The Madonna in Braunschweig too was assumed for many years to have been painted by a French artist, namely Simon Vouet (1590-1649).5 This is understandable, since Vouet painted copious images of the Virgin Mary, which resembled Van Bijlert’s works in both composition and execution (fig. 2).6 The work of both artists is characterised by simple compositions focusing on the image of Mother and Child, a bright palette with strong blues and reds, and playful variations, depicting Mary and her baby – as half figures – in a succession of different poses. The Madonnas painted by Vouet, who specialised in this subject, appealed to a large market in Catholic France; numerous prints continued to be made after these paintings for decades.7 Aside from the stylistic similarities, it is also significant that Van Bijlert had a strong connection with France, and there is some evidence that he and Vouet may have been acquainted. Joachim van Sandrart (1601-1688) wrote in his Teutsche Academie that Van Bijlert stopped off in France on his way to Italy and spent some time there.8 Since this French period came immediately after his apprenticeship with Abraham Bloemaert (cat. nos. 6 and 7), it may have been his master (who had himself worked in Paris for a few years) who encouraged him to do so. The stay introduced Van Bijlert to the French art world. Vouet had already settled in Italy some years earlier. It seems likely that the two men met in Rome, where both fell under the spell of the work of Caravaggio and other great masters.9 Years later, when Van Bijlert and Vouet had returned to their respective home countries, Adam Willaerts (1577-1664), after serving his apprenticeship with Van Bijlert in Utrecht, continued his training as a painter in Vouet’s studio in Paris. The French master often admitted Dutch pupils to his large studio, and it is a fair assumption that Van Bijlert sent Willaerts to his esteemed French colleague.10

The Virgin and Child is an unmistakably Catholic subject, of which Van Bijlert must have seen countless examples in Italy as well as in France. Although none of his French or Italian paintings have been preserved,11 he must have depicted this theme many times during his stay abroad. That he continued to paint scenes of this kind in his home country shows that there was a certain market for them, even in the Protestant Netherlands.12 Van Bijlert often painted works with a Catholic ambience, the greatest highlight being an altarpiece depicting St Willibrord and St Boniface in adoration before the Holy Trinity. This pre-eminently Catholic subject indeed hints at a revival of Catholicism in the Netherlands.13 Paintings of this kind have sometimes prompted suggestions that Van Bijlert himself may have been Catholic,14 like Bloemaert, who may have helped to mediate between his former pupil and Catholic clients. Numerous archival documents make it clear, however, that Van Bijlert and his family belonged to the Reformed Church.15 He evidently saw no objection to tackling Catholic themes, however, provided there was a demand for them. The un-Dutch subject of The Virgin and Child may have prompted him to paint this work in a more markedly classicist style, to match the taste of his Catholic clients. 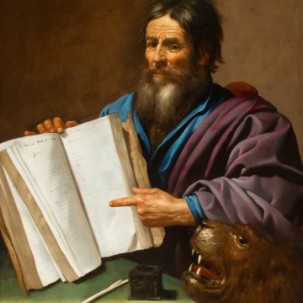