With a piercing gaze and an emphatic pointing finger, St Mark – identifiable by his fixed attribute, the lion – draws our attention to an open book: the gospel written by him. The prominent presence of an inkpot and a quill in the foreground emphasises his writer’s status. The immense realism with which his bronzed and deeply lined face has been painted, including characteristic details such as the bushy eyebrows, contrasts with the unconvincing lion’s head. While a human being of flesh and blood had undoubtedly sat as model for the evangelist himself, this exotic animal – which looks more like a large dog with monstrous teeth – bears little relation to reality. This is not so strange, since the artist Jan van Bijlert, who came from Utrecht, had probably never seen a real lion. To paint the creature, he would have had to consult works by other artists, most of whom would have been equally at a loss to capture the essentials of a lion. Perhaps it was the lion’s odd appearance that prompted a previous owner of this work to have it painted over. For when the painting turned up at an auction in Stockholm in 2011, the evangelist was no longer accompanied by his attribute. By then, the lion had been concealed by a layer of paint for over fifty years, since the creature had already been painted over in 1953, when it was put up for sale at the same auctioneer’s. The painting was described at that time simply as a ‘portrait of a scholar’ – without the presence of the lion, the scene’s religious significance had been lost. This effect may indeed have been a more important factor in inducing the owner to have the lion painted over: some may have seen a secular scholar as a more attractive subject than an apostle. The fact that the painting no longer belonged to the original series of four evangelists at that time will undoubtedly have contributed to this fate. For besides this figure of Mark, Van Bijlert also painted Matthew, Luke and John (figs. 1-3), all as half-length figures, accompanied by their standard attributes. The group remained intact until 1927, but the four paintings unfortunately became dispersed when the London art dealer Ward sold them off individually.

The provenance of Van Bijlert’s evangelists can only be traced back to 1822, but the earliest known owner is no mean figure. For the group belonged to the art collection of Cornelis Apostool (1762-1844), then director of the Koninklijk Museum, the precursor of today’s Rijksmuseum. He put up a large part of his private collection for sale (anonymously) at Christie’s in London in 1822, offering the four evangelists as a single lot. In 1830 the group came up for auction in London again, and although the four paintings were offered separately this time, they were all purchased by the same buyer. Almost a hundred years later, the inevitable happened, when the group was finally split up. Two of the paintings ended up in the possession of museums: John was acquired by the Centraal Museum in Utrecht in 1962,5 while Matthew now belongs to the collection of the Ulster Museum in Belfast. Luke has long belonged to a private collection in the Netherlands, and was auctioned at Christie’s, Amsterdam, in 2010. The fourth painting, depicting Mark, belonged to a private collection in Sweden for many years, and since its recent acquisition it has been restored to its original state, including the lion. In this restoration, the original green colour of the tablecloth also became visible once more.

Like many artists before and after him, Van Bijlert lived in Italy for several years. Because of this time spent abroad and its influence on his artistic development, he is grouped together with famous names such as Gerrit van Honthorst (cat. nos. 27 and 28), Hendrick ter Brugghen (cat. no. 11) and Dirck van Barburen as the Utrecht Caravaggists, although his work also has distinct classicist traits. He learned the principles of draughtsmanship, and possibly also of painting, in the studio of his father, Herman van Bijlert, who worked as a glass painter and glass engraver. His two elder brothers both worked on glass like their father, but Jan decided to become a painter, and was apprenticed in due course to Abraham Bloemaert (cat. nos. 6 and 7). In 1617, after working in Bloemaert’s studio for several years, Van Bijlert set off on his foreign travels, staying first in France and ending up in Rome. It was common for young artists to undertake journeys of this kind, which enabled them to familiarise themselves at first hand with the great Italian masters of classical antiquity, the Renaissance, and their own age. It was a period to which they would later look back in pride, and which also gave many artists a certain status. Some painters indeed continued to use the Italianised versions of their names after returning home. This did not apply to Van Bijlert, however, who called himself ‘Giovanni Bilardo’ in the sun-drenched south, but once back Utrecht, in 1624, reverted to his original name. Accordingly, he always signed his works ‘Jv bijlert’ – a signature that appears in the work discussed here in the upper right corner.

Van Bijlert very rarely dated his paintings, and neither this work nor the other three evangelists bear a date. Still, on the basis of the choice of subject and stylistic characteristics, we can assume that he painted the four evangelists shortly after he returned from Italy. St Mark the Evangelist is a convincing example of the artist’s Caravaggesque work, which is reflected particularly in the realistic rendering of the old man’s face. The choice of half-length figures, too, is Italian in origin. Joachim von Sandrart (1606-1688), whose acquaintance Van Bijlert had made in Rome, wrote a brief biographical sketch of the artist, in which he refers to half-length figures as one of the pictorial types that he had mastered in the South. In addition, the four evangelists constituted a popular subject in Italian art; but they also enjoyed a definite vogue for a time in the paintings and prints of the North, among Protestants as well as Catholics. Before Van Bijlert painted his series of four, other Utrecht artists too had tackled the subject, in diverse ways. For instance, around 1621, Ter Brugghen painted a group of four evangelists in a horizontal format, and Van Bijlert’s choice of subject may also have been influenced by the somewhat earlier evangelists by Joachim Wtewael. Nor was his former teacher Bloemaert unfamiliar with this theme; but he had painted the four evangelists around 1612 in a single painting, seated together like brothers around a table – an iconography that was particularly fashionable in the Southern Netherlands. 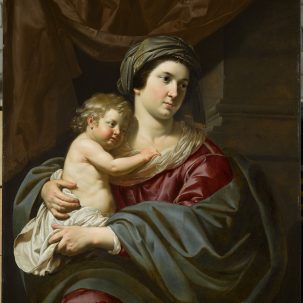