Ludolf Backhuysen, who came from Emden in Germany, started drawing ships around 1650. According to the artists’ biographer Arnold Houbraken (1660-1719), Backhuysen was initially self-taught, but later trained as a painter with Allaert van Everdingen (1621-1675) and Hendrick Dubbels (1621-1707). Backhuysen’s earliest dated paintings were made in 1658, and yet he did not enrol in the painters’ guild until five years later. His career advanced rapidly. Backhuysen’s View of the IJ near Amsterdam from 1666 (Paris, Musée du Louvre), a gift from the city of Amsterdam to the French minister of foreign affairs, Hugues de Lionne (1610-1671), was the first in a long series of large paintings of this kind, depicting major maritime events. When Willem van de Velde the Elder and Younger (father and son) moved to London in 1672-1673, Backhuysen became Amsterdam’s leading seascape specialist. The painter enjoyed a position of high social standing: foreign rulers visited his studio, his friends included well-regarded artists and poets, and his fourth wife (he remarried in 1680, following the death of his third wife) likewise came from a prominent family. Several marine painters are known as pupils of Backhuysen, who continued to paint until an advanced age. Besides an enormous number of maritime scenes, he also produced portraits, landscapes, topographical views, genre scenes, and even figurative Biblical scenes.

In the eighteenth century, a stormy sea by Backhuysen – like a ‘calm sea’ by Willem van de Velde the Younger − was already seen as an obligatory element of any collection of Dutch paintings. In our own times too, he is associated more with this theme than with any other. Backhuysen’s seascapes are indeed characterised by an atmosphere of high drama, and the one discussed here is a splendid example. This painting, which has not been published before, turned up at an auction in England at the end of 2007. Battling the turbulent waves we see four ships, their sails bulging with the force of the gale. The two ships in the foreground – a three-master and a two-master – are both flying the Dutch tricolour. Discernible in the background are buildings at the foot of a cliff, against which the ships may be dashed to pieces at any moment. The mountaintop is covered with snow, a unique detail in Backhuysen’s painted oeuvre. The artist has exploited light-dark contrasts to superb effect in this scene: as dark clouds gather on the upper left, the waves are illuminated by a beautiful white light. This near-theatrical lighting is characteristic of Backhuysen’s work. Ships on a stormy sea is composed in successive sections: at the front we see dark waves, followed by brightly illuminated waves, behind which are more dark waves, producing an enormous effect of depth. The large open space in the upper right-hand corner of the painting, with birds standing out sharply against the light background, enhances this effect.

Backhuysen, who is known as the ‘master of thunder-clouds’, was not so much concerned to render details as to convey narrative and action. The clouds and water dominate the picture, which can be construed as a narrative, since it is unclear how the storm will end. An attentive eye will see tiny figures in the ships. Their fate is uncertain, and it is this tension that enhances the painting’s dramatic impact.

For all the scene’s highly realistic content, it may also, perhaps, have been intended to convey a deeper significance. A seventeenth-century viewer, who saw the whole natural world as God’s creation, might have interpreted a shipwreck as symbolic of human life. After all, life itself brings numerous storms and dangers, and to be able to place one’s reliance in a beacon – God – is a great good.

Ships on a stormy sea is superbly executed; the convincing way in which the ships and the atmosphere are rendered is particularly noteworthy. It is characteristic of Backhuysen’s work that he often signed his name on a piece of driftwood or a barrel in the water. This painting is signed and dated in the lower left corner, on a floating package that has fallen out of a boat: ‘L B 1702’. This was the twilight of the painter’s long career; he would die six years later.

Dutch Ships in a Tempest 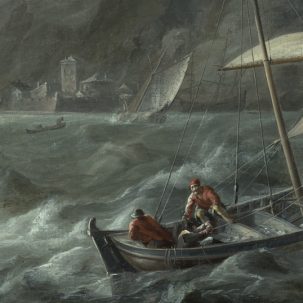