Little is known about Matthias Stom. He was probably born around 1600. This can be deduced from the earliest mention of his name in a document, namely in the 1630 Status Animarum of the parish of San Nicola in Arcione in Rome, where he is referred to as ‘Matheo Stom, fiamengo pittore, d’anni 31’ (‘Matheo Stom, Flemish painter, aged 31’). Marten Jan Bok has shown that the name Stom was widespread in the southern Netherlands, indicating that the artist or his ancestors probably originated from the area.1 From this and other documents, as well as from his few signed works,2 it also appears that his surname was in fact Stom and not Stomer, as has mistakenly been claimed in the art historical literature. In 1632 he moved from Rome to Naples, later travelling onwards to Sicily, where he probably spent the rest of his life. There he painted not only monumental biblical scenes but also more worldly subjects. That he was considered a leading artist is aptly demonstrated by the fact that Don Antonio Ruffo, duke of Messina, purchased several of his pictures in the years 1646-49. Ruffo is probably best known as a patron of Rembrandt, who painted his Aristotle, Homer and Alexander for him in the 1650s and 60s.3

Did Stom work in Utrecht before departing for Italy? His birthplace is occasionally given as Amersfoort; this would make a period of apprenticeship in Utrecht plausible, but research into local archives has yet to yield conclusive evidence.4 His style and choice of subject matter, however, are undoubtedly in the Utrecht tradition. His pictures are clearly influenced not only by Abraham Bloemaert (cat. nos. 6 and 7),5 but also by his fellow townsman Gerrit van Honthorst (cat. nos. 27 and 28). The latter had returned to the Netherlands in 1620 after a long sojourn in Rome, introducing the Caravaggesque manner into his native city. Caravaggism would prove a determining factor in Stom’s career and oeuvre. Naturally, he would later come into contact with both Honthorst’s and Caravaggio’s work while in Italy, but it is not impossible that he first became acquainted with it in Utrecht.

Stom’s style is easily recognisable. He had a predilection for well-nigh dramatic contrasts of light and shade, for candlelight, for the colours red and yellow and for vivid gestures and expressions. His heads are extraordinarily lively and often have a personal, even portrait-like quality. This expressivity is underlined in the combination of wrinkled, furrowed features and striking chiaroscuro. These features can all be found in Woman counting coins by candlelight. The candle in the foreground, with its rather oversized flame, is the only source of light in otherwise completely dark surroundings. The full effect of this illumination can be seen in the fingers of her right hand and her right cheek, both made more or less invisible by the cast shadows. Despite these visual theatrics, the artist has also managed to suggest a great sense of intimacy: the woman is completely absorbed in her task. Her clothing and rough hands characterise her as a popular type.

This work follows in a long tradition of depictions of men or women counting money. Such scenes often hover between genre and allegory, with the figures sometimes meant to represent Avaritia – avarice or greed – one of the seven deadly sins. In Cesare Ripa’s Iconologia, avarice is described as an old woman – ‘because cupidity dominates in the elderly’. She is accompanied by a wolf and has a closed purse, which she ‘gets more pleasure from gazing at […] than […] using […] to alleviate distress and indigence’.6 It may seem slightly callous to represent the elderly clinging to their worldly possessions; after all, life on earth will soon be over for them. However, in realising this the viewer comes to better understand the underlying moral – i.e. that striving for material wealth is meaningless, that life is about more important, exalted things.

The subject of Avaritia, either as an independent figure or as part of a series on the seven deadly sins, was extremely popular. Painters such as Albrecht Dürer, Marinus van Reymerswaele, Quentin Metsys and even Rembrandt are known to have treated it. Among the seventeenth-century Utrecht painters it was Abraham Bloemaert and Gerrit van Honthorst who created the most impressive variations. A print by Cornelis Bloemaert of 1625 includes all the attributes essential to the motif (fig. 1). The old woman is shown seated at a table laid out with a full moneybag and a box of jewellery; she counts her coins by the light of a candle, a pair of glasses in her right hand. The latter is an allusion to the proverb ‘Wat baet kaers en bril, als d’uyl niet zien en wil’, literally: ‘What use are candle and spectacles if the owl refuses to see’ (‘None so blind as those who will not see’). The owl, in the seventeenth century a symbol of stupidity and wickedness, is here the hopeless creature who although well equipped for seeing – with glasses and light – will always remain in the dark.7 In the same way, Bloemaert’s ancient crone is short-sightedly intent on her earthly riches. Glasses are often found in representations of Avaritia, for example in a work by Honthorst (cat. no. 28), where the woman is shown holding a coin up to the light and is wearing a pair of spectacles.

Interesting in Stom’s version of the theme is that both the moneybag and the glasses are absent. This does the composition good, making it stronger. By including only the most essential elements, nothing can distract from the visual power of the scene. There is yet another important difference between Stom’s picture and those of Honthorst and Bloemaert. In their work, the women depicted are without exception chastely clad, wrinkled old hags; in Stom’s picture, however, the woman’s loose dress offers us a glimpse of her still voluptuous bosom. This adds a tinge of sensuality to an otherwise purely moralising image.

Christ chasing the moneychangers from temple 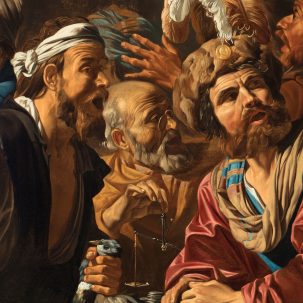