This is the copperplate from which Rembrandt printed his famous etching The beheading of John the Baptist, dated 1640 (fig. 1).1 The story is based on the gospel of St Matthew (14:3-11). Rembrandt depicts the climax of the tale, with John the Baptist, kneeling with his eyes closed, waiting for the fatal blow to fall. To the right is a servant with the plate upon which his head was to be presented to Salome. She had requested this gruesome gift as a reward for her dancing and is probably the woman standing among the spectators, directly behind the figure of John. The man with the feathered turban at her side may be King Herod, who had insisted her wish be carried out.

Rembrandt exploits the expressive potential of the dark background, using it to underline the brightly lit spectacle at the fore. The copperplate reveals how many various tones he was capable of achieving with this technique. The lines are often of equal width and sometimes comprised of small strokes, but are mainly crosshatchings of various weights. Rembrandt also added accents with a dry needle, resulting in the typical, thick velvety lines found in the earliest prints. Later, however, the plate was further reworked and rebitten, leading to a loss of detail, particularly in the shadowed areas.2

Rembrandt’s ability to achieve a variety of tones in his etchings was praised by writers from the very beginning. In 1718, for example, Arnold Houbraken described this chiaroscuro effect as ‘tender, twinkling darks, rendered as finely and softly as can be done by the art of mezzotint’.3 For Houbraken, the many nuances in the darker areas of the so-called ‘Hundred-guilder print’ made it the most beautiful in Rembrandt’s oeuvre. At the time, the prints of The beheading of John the Baptist must have already been popular for the same reason. 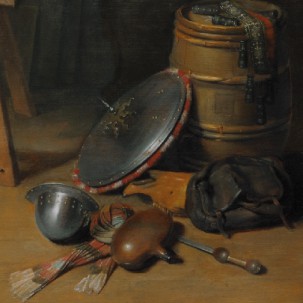